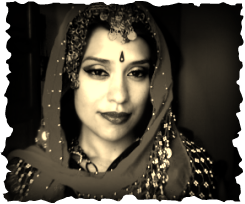 Originally from New York City, Anjali Angelita (a.k.a. Angelina) comes from a family lineage of dancers and entertainers. During her childhood she was immersed in music and dance and she quickly developed a love for both.  She began her training at the Bronx Dance Theater where she studied jazz, ballet and tap while also beginning to act and sing in school plays.  As a teenager, she continued studying dance as well as acting and singing more formally.  She also began developing a great enthusiasm for culture and the arts which led her to expand her studies to include fashion design.  When Anjali Angelita graduated from High School, she developed an interest in flamenco and began studying with flamenco master teacher and performer, K. Meira Goldberg.  She continued studying fashion design at the Fashion Institute of Technology and advanced her skills in singing and acting at HB Studio in Greenwich Village, New York City.

In 2006 Anjali Angelita moved to Los Angeles to pursue a career in acting. The natural landscape, fauna, flora and the desert hills of Los Angeles opened her heart to a journey of self-growth, empowerment, mysticism, and spirituality.  This journey led her to reunite with her Mestizo connection, inspiring a change in her creative outlook and compelling her to explore the realms of her ancestral lineage through prayer songs and spiritual rituals.  She incorporated her family's dance tradition Bomba, a Puerto Rican folkloric dance with the pulsing beats of congas, batas drums, chants, choir singers, and flying circle skirts into her dance performance.  It also became an added element she introduced at drum circle events and at her improvisational dance lessons in soul surrender and human liberation.

Her revelations deepened as she continued to uncover more of her family’s history tracing their dance lineage back to West Africa, Spanish "gypsy" flamenco and American Indigenous traditions.  She also encountered her “muses” who illuminated an ultimate sense of freedom through her art as well as an honor and love to all the spiritual dance practices from her ancestral descent.

Anjali Angelita’s discovery of her mixed heritage dance traditions also compelled her to study the origins of other world dances and eventually led her to travel and live outside of the U.S.  While still in Los Angeles she began her studies in Middle Eastern bellydance (Raqs Sharqi) with Zahra Zuhair and Jenna Rose at the Dance Garden.  She also studied Yoruban-West African Sabada dance with Francis Awe and Omowale at Live Arts Dance Center.   She then traveled the South Coast of India to experience culture of the people of India and had the opportunity to collaborate with carnatic musicians and learn Bharatanatyam and Odissi dance.

In 2011 she was given the opportunity to live in Hamburg, Germany to study the art of Egyptian dance and Algerian folklore with Algerian dancer Linda Miriam. There, she performed as a soloist for various shows and festivals in Hamburg and started a dance troupe called The Midnight Pearls Dance Ensemble. Anjali Angelita’s authenticity as well as her creative originality was soon recognized where she was feature as a special guest performer for clients from Turkey and Bulgaria in Hamburg. There she was able to capture the true dance essence dancing for the native people.

Two years later she resided to the Algarve in Portugal where she continued to perform and teach for my tourist retreat centers.

Anjali Angelita continues to travel in her quest for new sounds and dance movements. For her, it is all about discovering and sharing through dance an enlivening experience. She currently divides her time between United States and Europe. She is currently working on various art performances and collaborations.